Religion was the center of Olmec lifestyles, and heavily influenced their culture. The Olmecs, like many other ancient civilizations, had a complex polytheistic religion centered around nature, which was associated with the supernatural.
Olmec cities were built near springs, mountaintops, or caves, which they thought of as portals to the supernatural world. 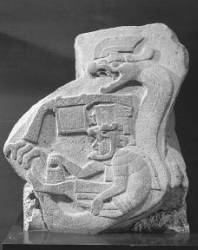 Carving of a shaman making an offering to the gods
Shamans were religious figures who were thought to be able to intervene in the supernatural world for the benefit of the people. For this reason, they were regarded with great respect and had great power over the people. One common practice undergone by the shamans was the process of taking hallucinogens and blood-letting in order to enter into a trance, where they were believed to transform into their animal spirits, called naguals. Once he was in this trance, he was believed to have entered the spirit world, and could manipulate the forces controlling rain and crop-growing. 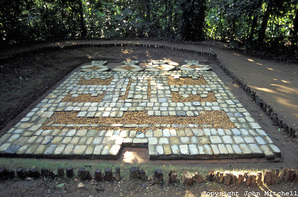 The jaguar was the main religious symbol of the Olmecs. It was considered the most powerful earthly predator because it navigated well on all terrain: the earth, the air, and the water. According to Olmec belief, they were descended from a breed of part-human-part-jaguar creatures. The most common nagual was the jaguar, and much Olmec art depicts their shamans as half-human, half-jaguar.

The Olmecs depicted the different transformations of the shaman through small clay scuptures.

Aside from the shaman's transformation ritual, the Olmecs also practiced human sacrifices as an offering to the gods. Their sacrifices were determined by a ball game they played. If you click below, you will be linked to the Mesoamerican Ball Game  section, where this game is explained in more detail.
Learn about the Olmec ball game
Powered by