The main social distinctions were made based on people's proximity to the center of town. They ate healthier diets and owned more imported goods, while those living on the outskirts of town were less wealthy and had none of these goods. At the center of the town was usually the religious pillar or altar for sacrifice. Because of the religious significance of the town center, the elite priests tended to congregate in the area. As one moves away from the center of the town, the levels of social hierarchy decline, and people living farther away are less prosperous.  Social classes, or the concept of people being more privileged than others, appeared in this fashion. 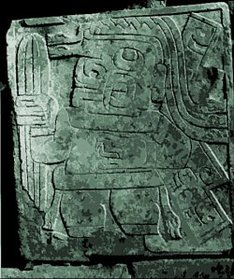 Chavin carving of a shaman-priest

Within Chavin society, people's lives and behaviors were centered on respect for priests, nobles, and deities. Because of the strength of their religion's influence, the power and control of religious figures was unquestionable. The elite group of rulers consisted of the shaman priests that controlled the city.

A CHAVIN PERSEPCTIVE: A DAY IN THE LIFE

Day to day, my life is constantly moving, changing, and advancing. Must of the society I live in depends on trade and interactions from all across the Andes Mountains. As a llama herder, I travel vast distances, taking with me various goods from Chavin de Huantar to spread to other areas. It is quite amazing to see the influence of my peoples across the vast distances I travel. What an amazing religion and way of life we must have, for all these people to follow in this way of life.
On the few days that I am within the city, it is amazing to see the various visitors coming in from across the Andes to deliver gifts to the priests. The temple, the very center of the town, is without a doubt the central part of the town. Hardly less than gods,  the priests rule over our civilization, and provide political order. Our priests are truly the most awe-inspiring beings in this world, who else can transform, as they do, into such powerful animal spirits and deities? All in all, it is quite amazing the life in which we live: numerous groups of people can unite as one under our divine gods.
Powered by